PUNE: Maharashtra Real Estate Appellate Tribunal’s first ever ruling came as a relief to home buyers who have purchased apartments or bungalows in the Lavasa township.
The tribunal on Thursday set aside its earlier order passed in January and directed that the case be taken up for hearing again. The case will now be heard before the adjudicating member in Mumbai on March 27.

In its ruling it said that the long lease project comes under the ambit of MahaRERA. Earlier in January, MahaRERA had stated that the complainants were merely lessees of Lavasa Corporation and their appeals lacked legal standing and the complaint was dismissed for want of jurisdiction.

After hearing arguments by KK Ramani, counsel for home buyer Jitendra Tulsiani, and K Talukdar, representing Lavasa Corporation, Justice(retd) K U Chandiwal, who presided over the appellate tribunal, set aside the January 15 order and remanded it back to MahaRERA. 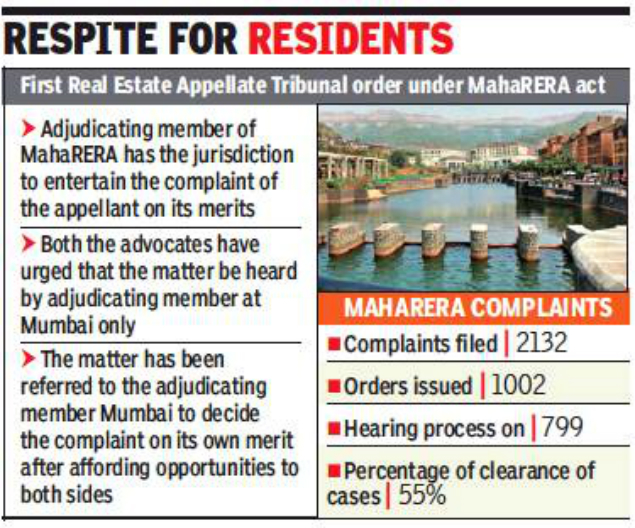 While MahaRERA had transferred all complaints related to Lavasa to its bench in Pune, Chandiwal directed the adjudicating office in Mumbai to hear the matter, following requests from both counsels.
The appeal was filed by Jitendra Tulsiani, who purchased/leased a flat in April 2014 after paying a premium of Rs 43.77 lakh and lease rent of Re 1 per annum. The lease period was for 999 years with clause of renewal by a further 999 years.
KK Ramani, the counsel for the applicant, argued that according to section 105 of the Transfer of Property Act, a lease is a transfer of a right to enjoy immovable property for a certain time or in perpetuity. A lease of 999 years with provision for renewal for a further period of 999 years and without any restrictive covenant is a transfer of rights to hold and enjoy in perpetuity. Justice Chandiwal upheld the argument made by Ramani that 999 years of lease was transfer of ownership and that MahaRERA had the jurisdiction to hear complaints of buyers who purchased flats on long lease.
Previous Post PropertyChek safeguarding the homes of those who shield us … The Indian Army!!
Next Post As the Supreme Court tightens the noose… Will RERA secure the future?