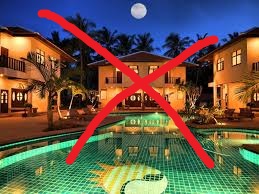 It was probably around 10 pm. I made a casual call to my brother back in Hyderabad. He was in US for a while and went back to India to pursue MBA in a top school in Hyderabad in 2005.  He had recently bought an apartment in High-tech city and knew that prices were raising rapidly. One of his close associates recommended him to take a look at Mapletown, which was being planned as a villa community of over 230 houses. It sounded like a great buy for about 1.05 crore, and the few weeks between my brother putting his deposit and my placing a deposit, the price increased by 10 lakhs.  After some quick consideration with my wife, I went ahead and committed to a villa with an assumption that it will be completed in two years.  The next steps in giving a deposit and paying registration fee for the land happened rapidly.

But, that’s where the train stopped.
In my next trip to Hyderabad, I tried to stop at the builder’s office and ask what’s happening to the construction. They were busy pitching another major venture called Oxygen City. They had a bunch of huge hoardings to show off the potential dream this time in Oxygen city. They were less interested in talking about the construction but continued to sell the dream. I got tempted and went ahead and took a tour. Luckily, I didn’t commit to another investment there.
Oxygen city lost its oxygen in subsequent years, but there wasn’t any life in Mapletown either. The broker who sold us the villa in Mapletown disappeared, perhaps it is fair to say he resigned and found another job. It was tough to find anyone to talk to in the builder’s office. My brother had the same problems. He didn’t have time to go check on his villa.
On the other hand, the notices to pay subsequent amounts came promptly. Whenever I ask them to tell about the status, I could only hear radio silence. Sitting in US and dreaming about a villa costed dearly, not just in money but emotionally as well.
Then I started taking frequent trips to Hyderabad and tried to go to them every time I was there and also check on the construction status.  In the meantime, there were about 30% of villa owners in the community who had paid in bulk for the villa upfront for a great deal. These guys were very serious about getting their villa done somehow. But, they also realized that it is better to work with the builder than go to courts. They formed a owners association and started having regular meetings and influenced the builder to complete their villas (probably with my money) and the roads and other common amenities. My villa’s construction progressed gently and came up to the finished outer structure without any windows, doors, tiles, etc. I pressed ahead with some more effort and found the person who was in charge for the construction. I started working with him closely to at least know what’s going on. In the meantime, the builder contacted for more money, this time promising that he would actually complete the construction if I pay the remaining amount. Contractually, we have an agreement to give some percentage of money at the time of handover of the villa. I negotiated with the builder to continue the construction with additional money but in several phases. However, the progress didn’t match the funds.
After realizing that I wouldn’t be able to get things done sitting in US, I decided to sell the villa. When I visited the community last year, it has grown into about 100 families and neatly constructed roads and parks. They have completed the common areas like community hall and tennis court. I guess it took over 8 years to get to this point but I am glad that at least 100 families have fulfilled their dreams, though mine didn’t.
We have recently sold the villa to a young couple, who would be perfect for the villa. I am so glad for them to have the villa and equally glad that I sold it.
I guess some dreams never come true.
Thinking back on what I would do differently, I think the main aspect would be to be able to get a clear understanding of the builders, their reputation and commitment and how many projects they are talking about and how they delivered on previous projects. Legal due diligence would also help to ensure that they can actually start the project. In my case, the builder had the possession of the land and was able to complete the registration relatively quickly. But, I should have sensed that the builder is over ambitious and potentially going to put my money in some other project and may not start the construction.
Another option is to pay the premium to buy a villa / apartment that is close to being finished and you are essentially paying more to reduce the risk.
Another key learning is to find dependable people who can actually represent you. Having friends and family may not help if they are not able / willing to do this job. The fact that it is tough to get around anywhere in places like Hyderabad for older people adds to the problem. Younger folks have their jobs to do and make a living.
[Shared by a member of the founding team]
Previous Post Delivery of 1.5M homes across 7 major cities is delayed by 14-30 months
Next Post Rajya Sabha clears Real Estate Bill seeking to make consumer the king